Skip to content
Rate this post
Smartphone maker Oppo has launched the Oppo K1 smartphone in India with its in-display fingerprint sensor. It has been launched exclusively on Flipkart. The company launched this handset in China in October last year. This smartphone has an in-display fingerprint sensor. Let’s say, the Oppo K1 has a 25 megapixel selfie camera. This smartphone is coming up to 4GB of RAM variants. Its launch price has been kept at Rs 16,990 on Flipkart.
Speaking of specifications, Oppo K1 smartphone with dual SIM runs on Android 8.1 Oreo. This phone has a 6.4 inch full HD + display, whose resolution is 1080×2340 pixels. This smartphone is powered by the Octa Core Qualcomm Snapdragon 660 processor. If you talk about cameras in this smartphone, then there is a dual camera setup in the rear. This phone is available in Van Gogh Blue and Mocha Red Color Variants. 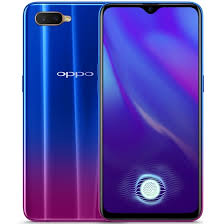 The phone has a 16 megapixel primary camera and 2 megapixel secondary camera. Right now, the phone has a 25-megapixel camera for selfie and video chat. Oppo K1 has 64GB of inbuilt storage, which can be increased to 256GB via micro SD card. This phone has 3,600mAh battery. Plus, this smartphone has a 3D glass in the back.
Also read
Nokia 5.1 Plus and Nokia 6.1 Plus Smartphones cheap price at Flipkart

Getting 90% Buy Back Offer

Talking about the launch offers, the CITI bank will pay an Instant Discount of 10% on payment of credit and debit card. Also there is a complete mobile protection offer, including No Cost EMI. Besides, if you want to buy this smartphone on an EMI, its 90% buyback value is available for 8 months. During this time, if you exchange the phone, 90 percent value will be returned.
Also read
ऑनर View20 स्मार्टफोन अब MyJio स्टोर्स और रिलायंस डिजिटल पर भी मिलेगा